Who's GAGA CITIZEN? Where is GAGA LAND? 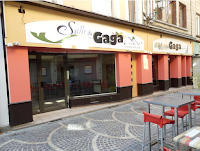 (ENG) THE ADMINISTRATIVE COURT OF LYON CONDEMNS THE TOWN HALL OF SAINT ETIENNE. 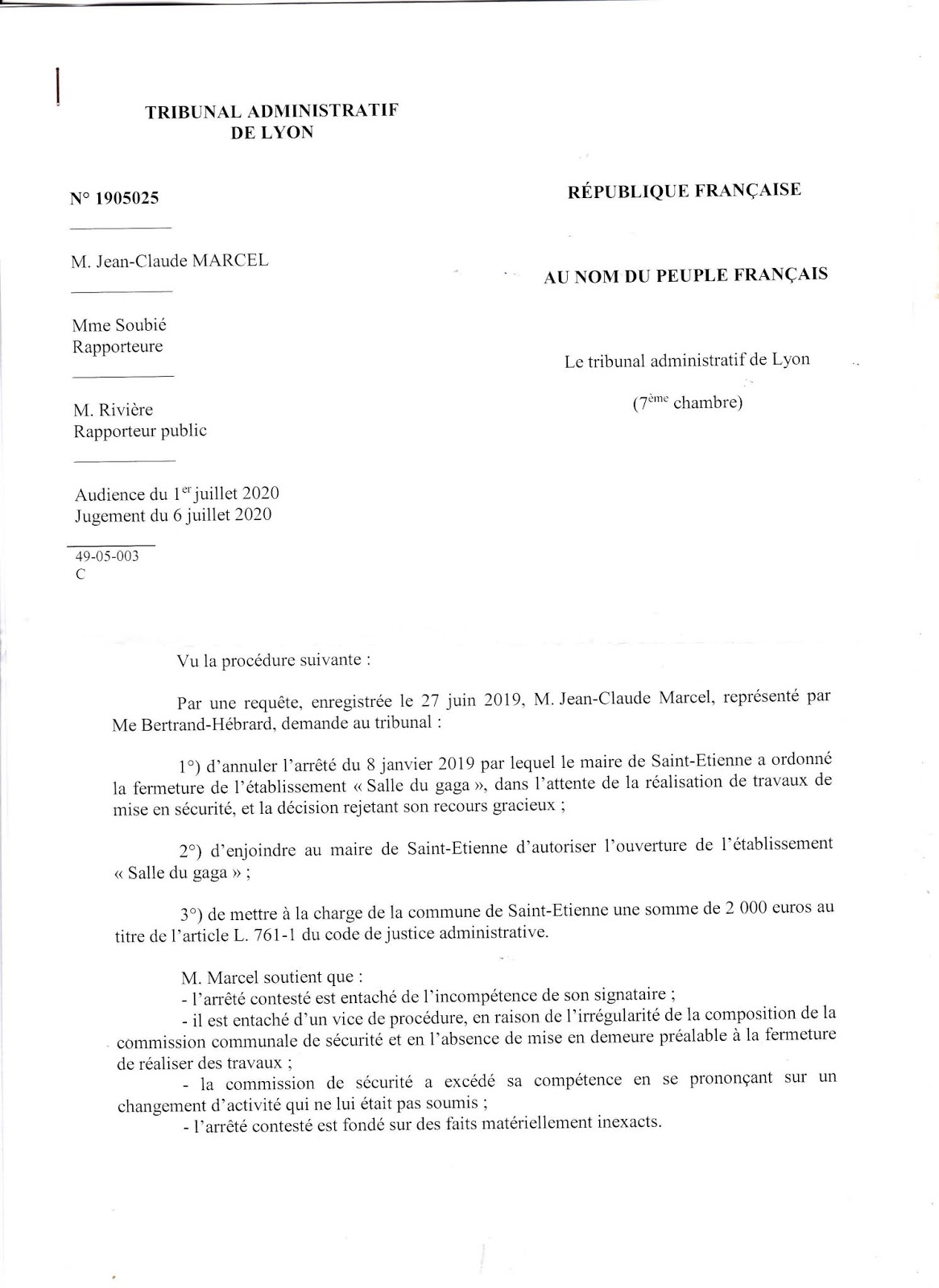 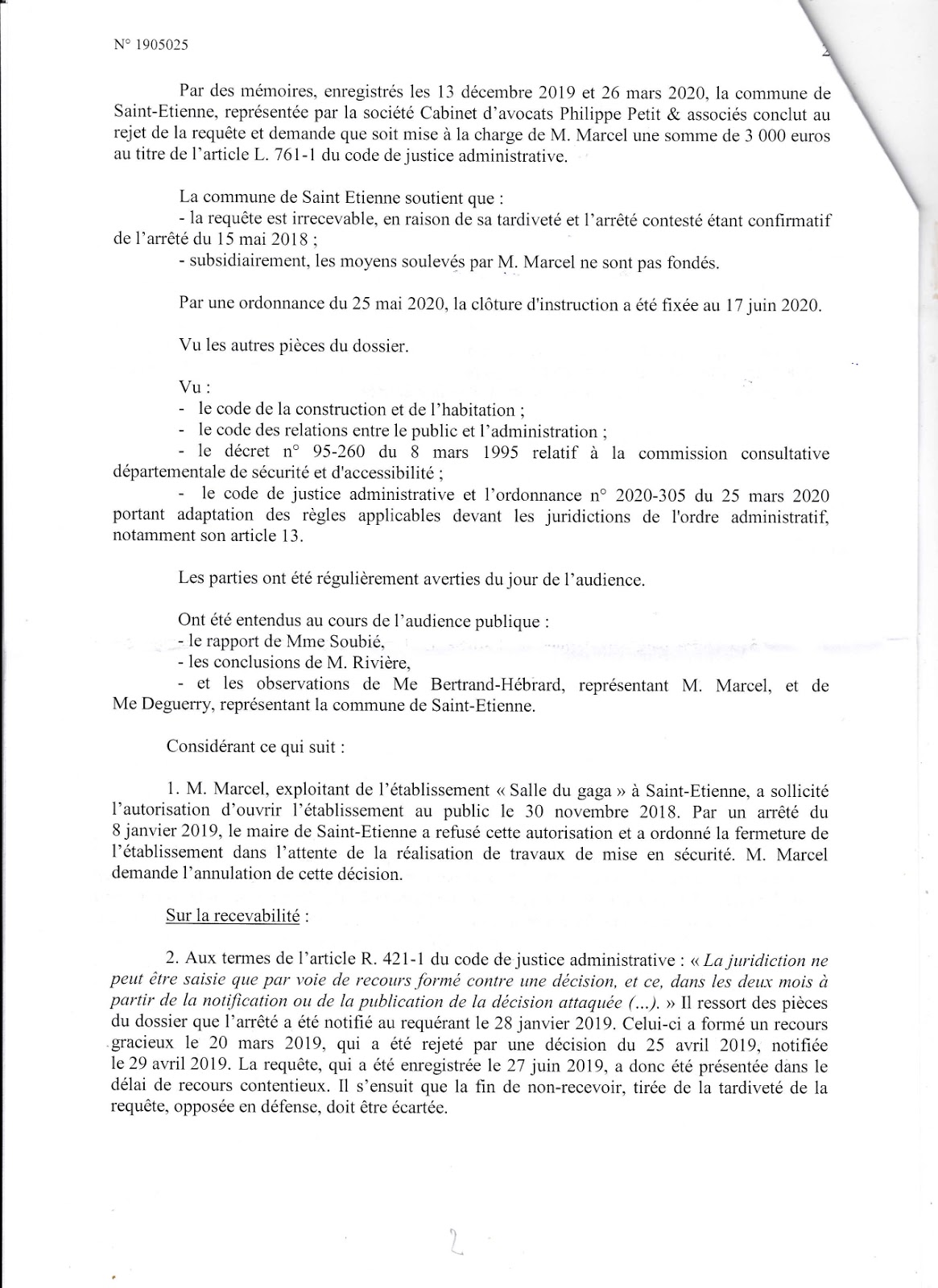 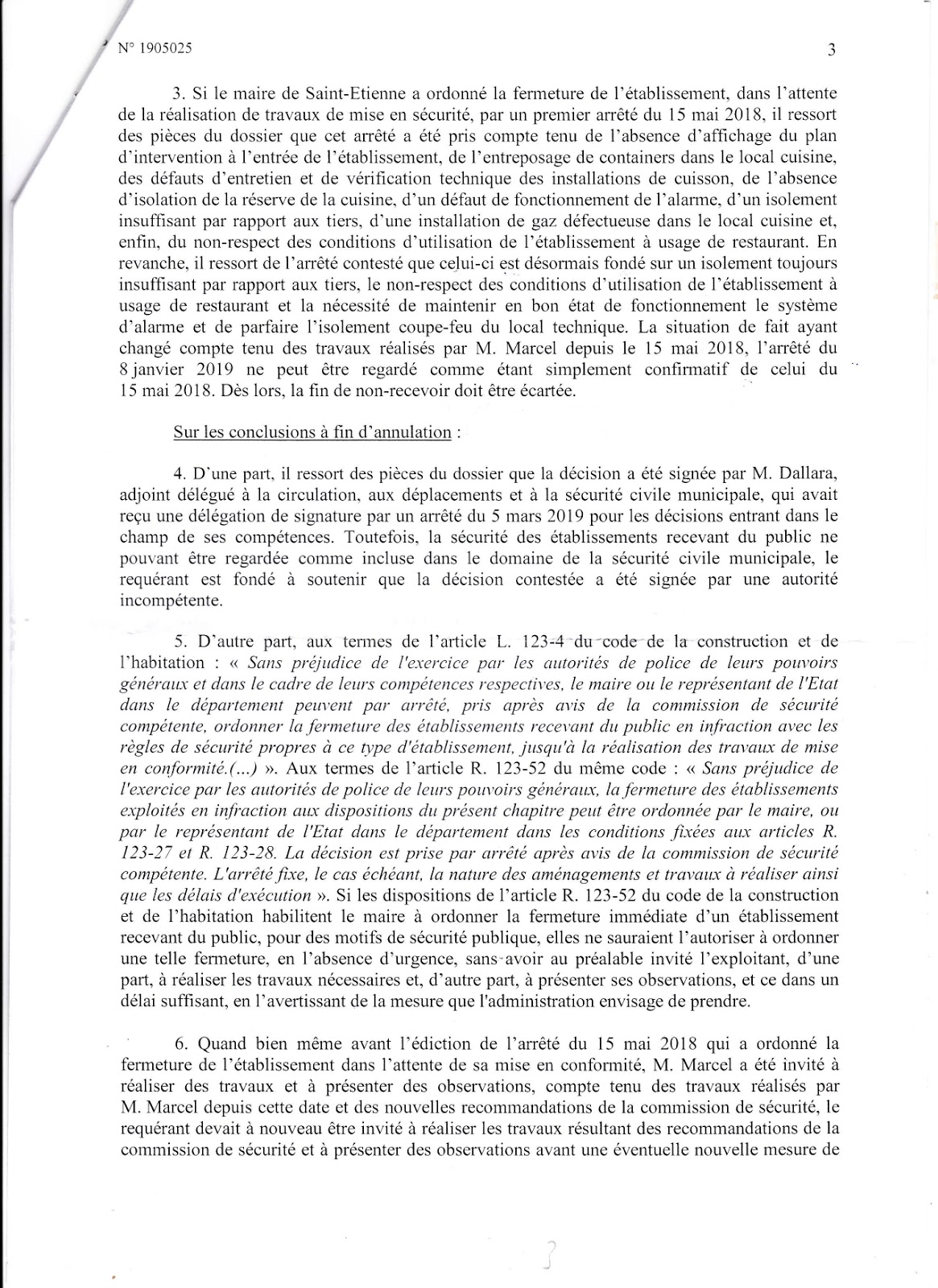 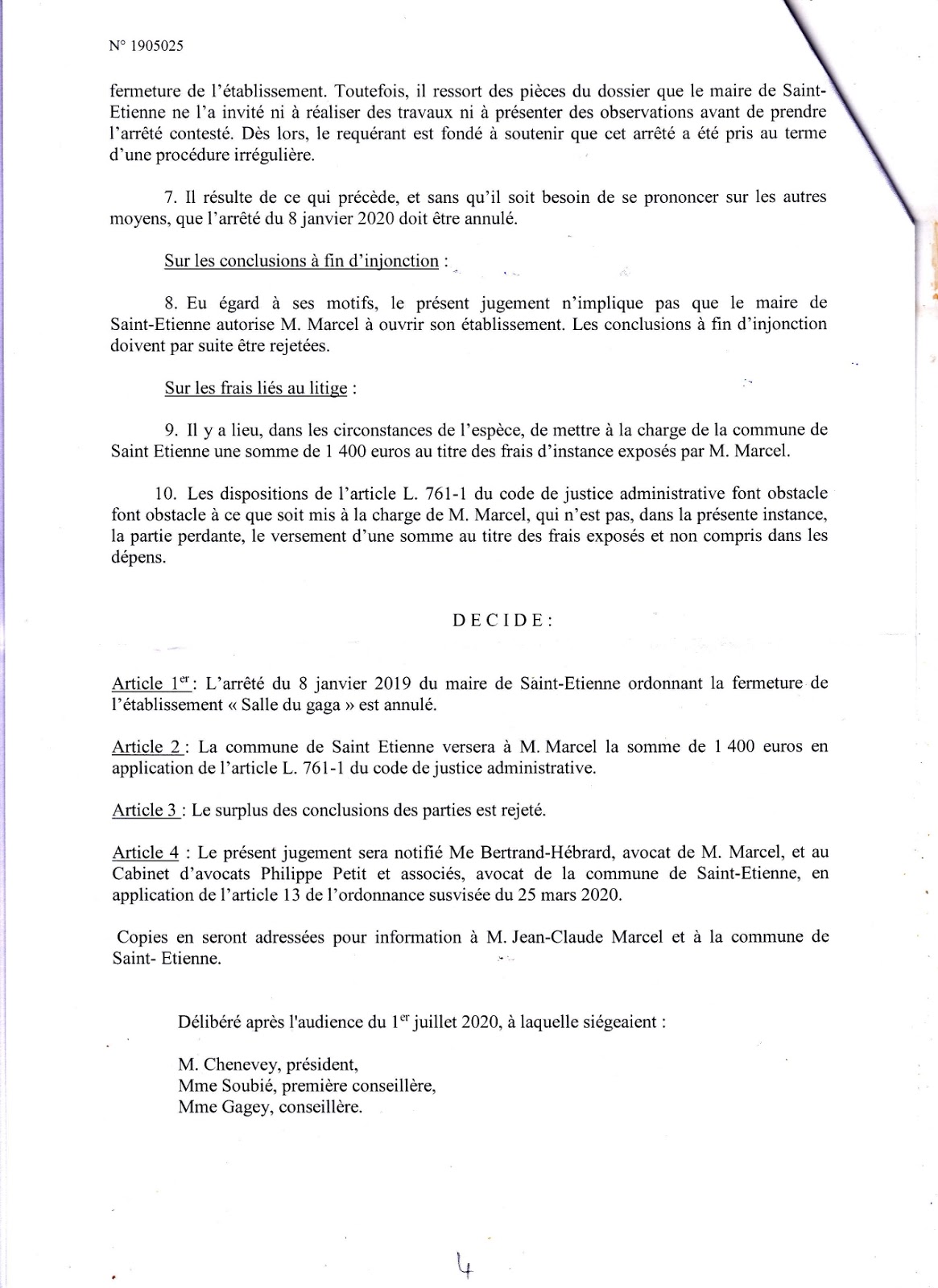 Mr. Jean-Claude MARCEL
IN THE NAME OF THE FRENCH PEOPLE

by a request, registered on June 27, 2019, Mr. Jean-Claude Marcel, represented by

Me Bertrand-Hébrard, asks the court:

1o) d, cancel the decree of January 8, 2Ol9 by which the mayor of Saint-Etienne ordered the closure of the “Salle du gaga” establishment, pending the completion of safety, and the decision rejecting his gtacious appeal;

2 ") to order the mayor of Saint-Etienne to authorize the opening of the establishment
“Gaga room”;

concludes rejection of the request and request that Mr. Marcel be charged a sum of 3,000 euros under article L. 761-l of the code of administrative law.

The municipality of Saint Etienne maintains that:
- the request is inadmissible, because of its lateness and the contested decree being confirmatory the decree of May 15, 2018;
- in the alternative, the pleas raised by Mr Marcel are unfounded.

Having regard to the other documents in the file.

Seen:
- the building and housing code;
- the code of relations between the public and the administration;
- Decree No. 95-260 of 8 March 1995 relating to the consultative commission departmental security and accessibility;
- the administrative justice code and ordinance no 2O2O-305 of March 25, 2020adapting the rules applicable before administrative courts,
in particular its article 13.

The parties were regularly informed of the day of the hearing.

The following were heard during the public hearing:
- Mrs Soubié's report,
- the conclusions of Mr. Rivière,
- and the observations of Me Bertrand-Hébiard, representing Mr. Marcel, and of

Me Deguerry, representing the municipality of Saint-Etienne.

2. Under the terms of article R.421-1 of the code of administrative justice: “The court shall not can be seized only by way of appeal lodged against a decision, and this, within two months of from the notification or publication of the contested decision (...).
"It appears from the documents of the file that the decree was notified to the applicant on January 28, 2019.
The latter appealed graceful on March 20, 2019, which was rejected by a decision of April 25, 2019, notified on 29 April 2019.
The request, which was registered on June 27, 2019, was therefore presented on time limit for litigation. It follows that the end of inadmissibility, based on the tardiness of the motion, opposed in defense, must be dismissed.

3. If the mayor of Saint-Etienne has ordered the closure of the establishment, pending of the realization of safety works, by a first anêté of May 15, 2018, it resotl
The documents in the file that this order was taken into account of the lack of display of the plan intervention at the entrance of the establishment, storage of containers in the kitchen room,
faults in the maintenance and technical checks of the cooking installations, the absence of insulation of the reserve in the kitchen, an alarm malfunction, isolation insufficient compared to third parties, a faulty gas installation in the kitchen room and, finally, non-compliance with the conditions of use of the establishment for restaurant use. In
On the other hand, it emerges from the contested decree that it is now based on isolation that is always insufficient in relation to third parties, non-compliance with the conditions of use of the establishment restaurant use and the need to keep the system in good working order alarm and perfect fire insulation of the technical room. The factual situation having changed in view of the work carried out by Mr. Marcel since May 15, 2018, the order of January 8, 2019 cannot be regarded as simply confirming that of May 15, 2018. From then on. the end of inadmissibility must be ruled out

On the conclusions at the end of cancellation:

4. On the one hand, it emerges from the documents in the file that the decision was signed by Mr. Dallara, deputy delegate for traffic, travel and municipal civil security, who had received a delegation of signature by a decree of March 5, 2019 for decisions falling within the field of its competence. However, the safety of establishments open to the public may be regarded as included in the field of municipal civil security, the applicant is justified in claiming that the contested decision was signed by an authority incompetent.

5. On the other hand, in accordance with Arlicle L. 123.4 -du'cod'o of the construction and
The dwelling '. << Without prejudice to the exercise by the police authorities of their sidewalks general and within the framework of lew's respective competences, the mayor or the representative of the State in the department can by decree, taken after opinion of the committee of security competent, order the closing of establishments open to the public in inJiaction with the safety rules specific to this ÿpe of establishment, until the implementation of the in conformity. (...) >>. Under the terms of article R. 123-52 of the same code: << Without prejudice to the exercise by the police authorities of their pot: general duties, the closure of establishments exploited in violation of the provisions of this chapter may be ordered by the mayor, or by the representative of the Etctt in the department under the conditions set out in articles R. 123-27 and R. 123-28.
The decision is taken by decree after the opinion of the safety committee. competent. The fixed judgment, if applicable, the nature of the arrangements and troÿaltx to be carried out as than the execution times ”.
If the provisions of article R. 123-52 of the construction code and housing empower the mayor to order the immediate closure of an establishment receiving members of the public, for reasons of public security, they cannot authorize him to order such a closure, in the absence of emergency, without having previously invited the operator,
par1, to carry out the necessary work and, on the other hand, to present his observations, and this in a sufficient time, advising him of the action the administration plans to take.

6. Even before the decree of May 15, 2018, which ordered the
closure of the establishment pending its compliance, Mr. Marcel was invited to to carry out work and to present observations, taking into account the work carried out by Mr. Marcel since that date and new recommendations from the Safety Commission, the applicant should again be invited to carry out the work resulting from the recommendations of the
committee and to present observations before a possible new

closure of the establishment. However, it appears from the documents in the file that the mayor of Saint-
Etienne did not invite him to carry out any work or to present observations before taking the contested order. Consequently, the applicant is grounded in maintaining that this ar: rëté was taken at the end of irregular procedure.

7. It follows from the foregoing, and without the need to comment on the others means, that the decree of January 8, 2020 must be annulled.

On the costs related to the litiee:

9. In the circumstances of the case, the municipality of
Saint Etienne a sum of 1,400 euros for the costs of proceedings incurred by Mr. Marcel.

10. The provisions of article L. 761-l of the administrative justice code are an obstacle preclude the charge against Mr. Marcel, who is not, in the present proceedings, the losing party, the payment of a sum for the costs incurred and not included in the costs.

Article 1: The decree of January 8, 2019 of the mayor of Saint-Etienne ordering the closure of the establishment "Salle du gaga" is canceled.

Article 2: The municipality of Saint Etienne will pay Mr. Marcel the sum of 1,400 euros in application of article L. 761-l of the administrative justice code.

Article 3: The surplus of the conclusions of the parties is rejected.

Article 4: This judgment will be notified to Me Bertrand-Hébrard, lawyer for Mr. Marcel, and to Law firm Philippe Petit et associés, lawyer for the municipality of SainlEtienne, in
application of article 13 of the above-mentioned ordinance of March 25, 2020.

Copies will be sent for information to Mr. Jean-Claude Marcel and to the municipality of

Deliberated after the hearing of July 1, 2020, at which seated:

Make it public by making it available to the registry on July 6, 2020.

The rapporteur, The President, -!

to the execution of the present decision.